Yeast is a kind of fungus with simple morphological structure, rich in protein, vitamins, growth factors and other nutrients, and can produce single-cell protein. Yeast has unique efficacy and value in the treatment of organic wastewater. In addition, yeast also has the functions of preparing vaccines and removing fishy smell. The article summarizes and summarizes the application of various functions of yeast in aquaculture.

The role of yeast in aquaculture

Yeast cells are rich in protein, vitamins, growth factors and other nutrients, and have good palatability, and most of the yeast are non-toxic and can be eaten. In addition, yeast can produce various active extracellular enzymes such as cellulase, alkaline protease, amylase, lipase, phytase and other active extracellular enzymes and killing factors, which can be used as feed additives. Yeast is mainly used as a bait additive in aquaculture, and the yeast hydrolyzate product produced can partially replace fish meal. In recent years, my country's aquaculture industry has developed rapidly, and many yeast-derived products are widely used in aquaculture feeds to solve the problem of lack of feed protein sources.

Studies have shown that adding Phaffia yeast to the breeding feed of Macrobrachium rosenbergii can increase its weight gain rate by 14.48%, which also raises researchers' attention to Phaffia yeast. Another experiment showed that the exopolysaccharides produced by fermentation of three yeast strains (HS-J6, HS-J8 and HS-J9) from the intestinal tract of sea cucumbers were tested, and it was found that adding polysaccharides in the feed could help improve the intestinal tract of sea cucumbers. The activity of digestive enzymes can promote the growth of sea cucumber, and the effect of HS-J9 is outstanding, which provides a theoretical basis for the subsequent research on the application of marine yeast HS-J9 in aquaculture feed addition. 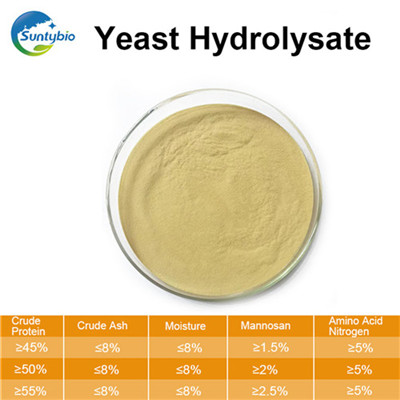 3 Enhance the immunity and disease resistance of aquatic animals

Brattgjerd et al. injected Atlantic salmon with glucose derived from yeast cell wall, and the results showed that it could improve the serum lysozyme activity and nonspecific immunity of Atlantic salmon. Sajeevan et al. fed L. indicus with glucan derived from marine yeast for 21 days, and then challenged them with WSSV. The results found that the 0.2% glucan group achieved the highest survival rate, and its enzyme activity was also improved accordingly. Two studies have shown that zymosan plays a significant role. Shi Huijuan and others have shown that the application of yeast with high SOD activity in aquaculture can improve the immunity of farmed animals.

The immune polysaccharide contained in the yeast cell wall plays an important role in improving the disease resistance of aquatic animals. Studies have shown that feeding Chinese mitten crabs with zymosan can improve their disease resistance. The survival rate of shrimp larvae can be increased and the tolerance to environmental factors can be enhanced by adding Ocean I red yeast to the bait. The laboratory of China Marine Bioengineering Center has confirmed that the thirsty factor produced by Pichia mirabilis has the strongest lethality to the pathogen of emulsification disease of swimming crab.

Astaxanthin can enhance the tolerance of aquatic animals to high ammonia and low oxygen, scavenge free radicals, inhibit lipid peroxidation, and improve disease resistance. Tests have shown that astaxanthin in Phaffia can inhibit the activity of ornithine decarboxylase, a key enzyme in tumorigenesis, thereby reducing the level of polyamines in aquatic animals and preventing the formation of tumor cells. Pichia kudriazwii has a variety of extracellular enzymes and tannase activities, and has a good prebiotic effect on aquatic animals. Studies have shown that the cytotoxic toxin synthesized by Pichia kudriazwiri RY55 strain has significant antibacterial effects on a variety of pathogens, and has great research prospects, which can be used as a new type of biological control strain.

Yeast itself is rich in nutrients and can produce a variety of nutritionally active substances through the fermentation process, such as beta-glucan, mannan, organic acids, etc. Yeast is high in protein, typically 40% of dry cell weight, and is easily digested. It is used to replace high-grade protein raw materials such as fish meal in most aquafeed enterprises, and this trend has increased significantly in recent years.

5 Improve the ornamental and edible value of aquatic products

Studies have shown that yeast can increase the ornamental value and edible value of aquatic products. After ingesting astaxanthin-rich Rhododendron and Phaffia rhodozyma, animals can directly absorb, store and deposit in tissues, thereby increasing the body color of farmed animals and improving the ornamental value of ornamental animals. Chen Xiaoming and other studies have shown that when Phaffia yeast rich in astaxanthin is added to the bait and then fed to Chinese goldfish, astaxanthin is deposited in the form of esterification in the body, and the pigment content of various parts of the fish body is increased. It can also make some fish, such as large and small yellow croaker, salmon, as well as shrimp and crab aquatic products, have a particularly bright body color and unique flavor.

Yeast treatment of wastewater is a new wastewater technology, which has broad development prospects in the aquaculture industry and will surely receive more and more attention.

Yeast biogenic feed is playing an increasingly important role in ecological farming. In addition, with the gradual systematic and deepening of the understanding of yeast, there will be more and more opportunities and applications of yeast in the field of aquaculture.

What is the main function of Bacillus licheniformis?

Can You Freeze Gooseberries?