A plastic film is used in the geomembrane, which acts as the anti-seepage material.

A geotextile material makes use of the nonwoven fabric. As they are geosynthetic material, geotextiles are used in drainage, separation of soil and gravel, and other like protecting the geomembrane and dewatering of the polluted liquids.

Water can easily pass through a geotextile material as it is made of geosynthetic material, composed of synthetic fibres through weaving or needle punching. Both of these geosynthetics are produced at high quality in Malaysia.

The significant differences between geomembrane and geotextile lie in the following factors:

The geomembrane is impermeable to water, whereas geotextile materials are water-permeable.

Nonwoven fabrics are used in geotextiles. Geotextile materials are usually used to strengthen the foundations. High-density polyethylene is used in geomembrane and it is commonly used in seepage prevention. The uses of different types of geomembrane and geotextiles will further be explained below.

Geotextile has exceptional drainage isolation, anti-seepage and strengthening properties, and filtration. Moreover, it has features like low weight, high tensile strength, permeability, heat resistance, and anti-freezing due to geotextile cloth and nonwoven geotextile. Geotextile is also used because it is highly resistant to corrosion.

Geomembrane makes use of plastic film, which is a famous anti-seepage material. It has a small specific gravity, robust elongation, malleability, resistance to corrosion, low-heat resistance, and average frost resistance. Both of these materials, geotextile, and geomembrane, can be used alone or in combination to attain strength. 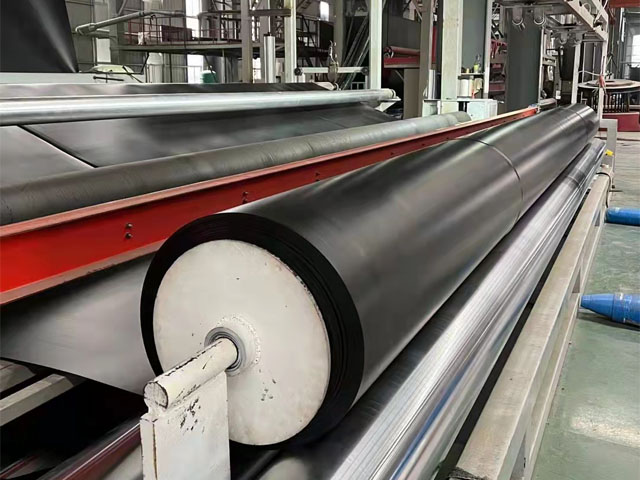 Geomembrane is usually used in engineering-related constructions where seepage-proof material is required for properties like isolation, firm foundations, good drainage material and anti-cracking. Another major difference is that for anti-filtering purposes, geotextile is highly preferred, while geomembrane is utilized for seepage-proofing.

Geotextiles, just as its name implies, is made of nonwoven fabrics and mainly used to the consolidated subsoil. Geomembrane is made of high-density polyethylene, primarily for seepage-proofing. The combination of the two is composite geomembrane, which can be divided into one cloth one membrane and two cloths and one membrane, with the more reliable anti-seepage property. Woven geotextile is heavily used in Malaysia for soil stabilization.

There is a wide range of geosynthetic materials in geomembrane that are used for lining purposes. Geomembrane is available in different designs and qualities to fulfil many requirements.

Some of the significant types of EcoGeoX geomembrane are:

Permaliner FPP is a type of geomembrane that is manufactured using maximum stability. It is black in colour.

It is incredibly flexible at different temperatures because it is made from polypropylene, which makes it suitable in many applications. Moreover, FPP has a very low density compared to the other geomembrane materials, so it is deployed easily for panels.

Permaflex Flexible Polyethylene (FPE) is a modern type of geomembrane. Its resistance to the base chemical is very high, along with less flexibility than Permaliner FPP. However, it still has the ability to flex when required. It is usually used in lining tanks like concrete tanks or timber tanks.

It is used in the secondary lining of fish farms as well. The most common use of Permaflex FPE is in irrigation canals and artificial lakes.

There are many advantages of Permaflex FPE. It is an excellent alternative to PVC for tank liners as it is chemical resistant. Moreover, flexibility and malleability of FPE allow it to be moulded in different shapes. It is a good UV resistant material as well.

Geotextile and geomembranes are both types of geosynthetics used in Malaysia.

The types of geotextiles are woven and nonwoven. Drainage applications would typically use a nonwoven due to their ability to filter without clogging, and unpaved roads usually use a woven geotextile.

Needle punched polypropylene staple fibres are used in nonwoven polypropylene (PP) geotextiles. Such fibres are cut, spread and placed, after which they are carefully needles, examined and rolled. The manufactured output of this process is commonly called “a nonwoven needle-punched geotextile”.

Nonwoven geotextiles have applications in roads and highways to stop the aggregate from getting mixed with the subgrade. As a result, they play a role in the strengthening of the soil. Similarly, nonwoven geotextiles are famous for drainage uses.

Extruding of the polypropylene film and siltation of the film into yarns produces the woven geotextile after weaving. They are used in stabilizing the base of unpaved roads. The fabric used is helpful in stopping the mixing of aggregate.

Moreover, they also support the stabilization of the soft ground where roads are damaged due to poor weather. Mudstop woven geotextile is water-permeable and has a wide range of applications in soil separation and stabilization. It is used for lining as well to control erosion.

What are the advantages and disadvantages of Container Houses

The 5 Reasons Why You Should Pick A Steel Truss